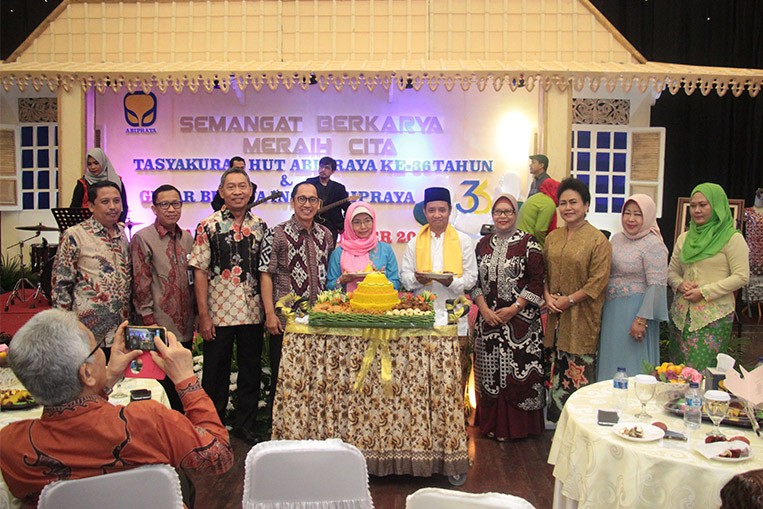 "Not only tasyakuran, since last October we have held several anniversary events. In contrast to previous years, this time Tasyakuran has a theme, "said Kamil Dynna Tiara - Corporate Secretary Brantas Abipraya.

Not without reason, tasyakuran this year besides the company wanted to show gratitude, Abipraya raising the spirit through Cultural Performance of Insan Abipraya. This is indicated by the presence of several performances from Brantas Abipraya's employees. Head office's employees giving performance of the Mask Dance Blantek namely the creation of regional origin Betawi dance as dance offerings.

Adding the excitement, the crew of Tasyakuran also made appearances by performing Betawi song, Ondel-Ondel and Ujan Gerimis. Not only filled with cultural performances by Insan Abipraya, coincide in the event Tasyakuran 36th anniversary this Brantas Abipraya for the first time launched Batik Abipraya as a corporate identity to the public.

Internal Competition badminton, and table tennis, gaple have been implemented at 6th floor of building Brantas Abipraya in mid-October. For the first winner badminton is Abipraya Beton, Division 2 winners of the second and the Division 1 champions 3. Winners gaple achieved as the Corporate Secretary 1st, Abipraya Beton 2nd and 3rd place was won by Division 2. As for the game Table Tennis, KKBA got the 1st, 2nd achieved BKI Project and Production Department as 3rd.

Fun for the game of Futsal, project Pensions Athletes come out as winners Champion, followed by Division 2 Champion 2 and Project 3. The ICC Champion Fun Futsal draw from this, at the opening of the Heroine Abipraya meriahkan participated in the exhibition friendship. On Pingpong Ball Agility competition, won 1st 2nd Division, Ministry of Finance as the 2nd and won the Champion Energy Brantas 3. Human Capital Department also won 1st Place in the race dexterity Blind Snake, followed by the Secretariat of the Company as the 2nd and 3rd Divisions.

Not only to reward the winners of the 36th year anniversary of Abipraya worth tens of millions of rupiah, in this Tasyakuran Brantas Abipraya also allot 36 door prizes with a grand prize that is Motorcycles.