Greening the Upstream of the Padang Guci River, Abipraya and their Children Planted 1,720 Trees 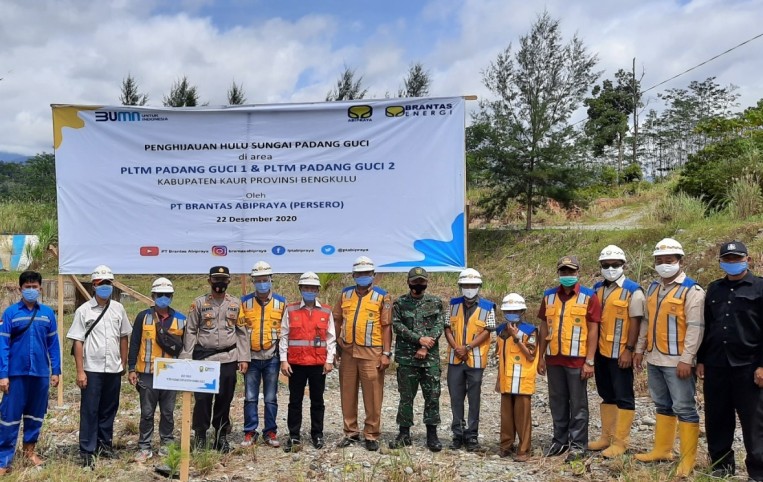 Bengkulu, 22 December 2020 - PT Brantas Abipraya (Persero) together with its subsidiary PT Brantas Energi conducted land greening in the PLTM Padang Guci 1 and PLTM Padang Guci 2 areas in Bungin Tambun Village, Padang Guci Hulu District, Kaur Regency, Bengkulu. By planting 1,720 trees along the upper reaches of the Padang Guci river, all of these trees will be planted on an area of ​​2.4 hectares (Ha).

"We chose the location here because planting this tree is our effort to green the area around the PLTM owned by Brantas Energi. In addition to tree planting, to prevent erosion we are also planting vertiver using polybags, ”said I. Rudi Pudianto as the Brantas Abipraya Partnership and Community Development Program (PKBL) Manager.

Strengthening his explanation, Rudi added that this action was a proof of the commitment of Brantas Abipraya and Brantas Energi in caring for the environment. This is demonstrated by providing land benefits in the PLTM Padang Guci 1 and PLTM Padang Guci 2 areas, each of which has a land area of ​​1.2 hectares. 1,720 trees will be planted along the upstream of the river including 370 pine trees, 850 durian stems, 500 mango stems. Apart from trees, as many as 30,000 Vertiver polybags were planted to prevent landslides and prevent flooding.

Not only attended by the Brantas Abipraya PKBL Manager, the activity which was also attended by the Chief of the Sub-District Military (Danramil) Kaur Utama, the Head of the Padang Guci Hulu Police Sector and the Padang Guci Hulu Sub-District Head also invited and fostered public awareness in managing and maintaining environmental sustainability. . He hopes that the community will protect and preserve the environment so that their children and grandchildren will enjoy it later.

As additional information, greening areas are being carried out around PLTM Padang Guci 1 which has a capacity of 6 Mega Watt (MW) and PLTM Padang Guci 2 with a capacity of 7 MW. So that Brantas Abipraya and Brantas Energi hope that it will not only become an electricity production area but also give birth to a beautiful environment that is protected from landslides, can become a water absorption area for several surrounding villages, and maintain a variety of flora and fauna in the Padang Guci area.

"It is hoped that this activity will be carried out in a sustainable manner as an effort to preserve nature, with the correct planting techniques, good seeds, to be maintained and controlled so that it is not only limited to reforestation," said Rudi.