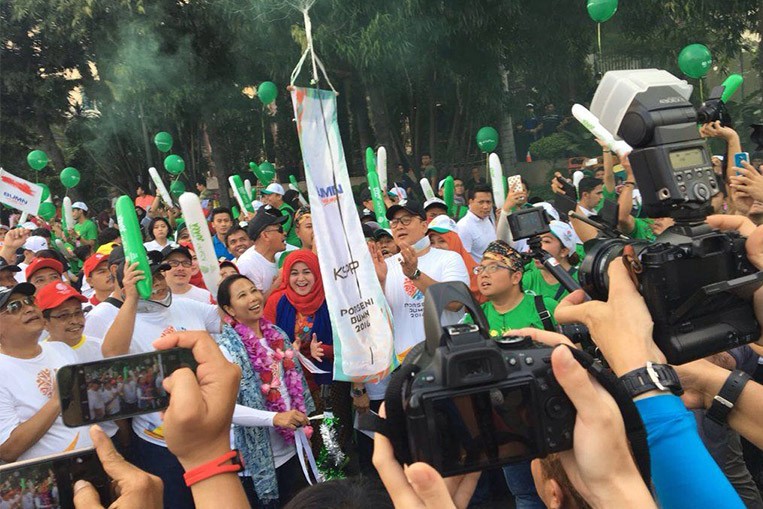 Together with 117 other BUMN, PT Brantas Abipraya (Persero) graced the opening of the Porseni BUMN 2016 along the way MH. Thamrin, Jakarta. Porseni opening procession begins with a fun walk from the Ministry of SOEs Merdeka Selatan Road, MH. Thamrin Road, along Sudirman Road, the Hotel Indonesia roundabout and back to the Ministry office.

"In the spirit of togetherness, Porseni BUMN was opened in 2016. Let stand for fairness to inculcate the spirit of synergy between the companies in order to be able to contribute positively to each BUMN and for Indonesia, "said Rini M. Soemarno - Minister of State Owned Enterprises.

This 9th Porseni themed "Spirit of Sportsmanship Champion Respect and Achievement". Runs from November 21st to December 4th, 2016 this event is ready to hold a nine sports include football, futsal, basketball, badminton, table tennis, bowling, tennis and volleyball courts as well as the five branches of art that is Duta BUMN, vocal group, "stand -up comedy ", dances, and music groups.

In the opening Porseni, along the path of healthy, Rini along with the Deputy Minister of State, Directors, Commissioners and employees of BUMN, as well as athletes with special needs walk up the five points that each stopover point filled by the Deputy that featured attractions or Happening Act at the Ministry of SOEs. Brantas Abipraya incorporated in Construction, Transportation Infrastructures Deputy along with 32 other state.

Not only the appearance of each Deputy, clad in shades of Betawi, opening Porseni this time presenting various arts such as Palang Pintu, martial arts, unrequited rhyme, tanjidor, marching bands and Kecak Dance.